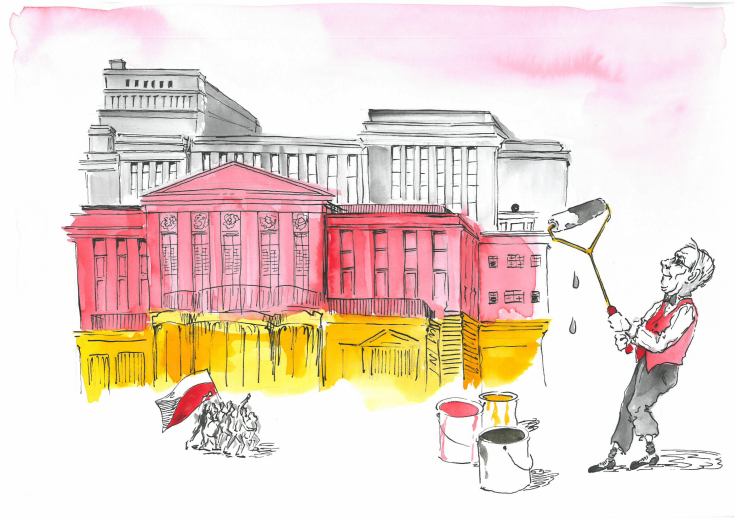 The largest theatre outside Prague came into existence as a demonstration of German supremacy over the town.

The declaration of Czechoslovakia in October 1918 brought Teplice mayor Dr. Ernst Walther into action. He ruled a town where more than 90% of the inhabitants were German and he did not identify himself with the new state at all. Two days following the official formation of the republic, he, together with virtually all of the town’s elite, espoused the idea of the independent state of Deutschböhmen.

So, the autumn of 1918 was hard in Teplice. Both the Czechs and the Germans repeatedly showed each other their determination to incorporate the town into “their” state, members of the Sokol movement in Trnovany set out on a march through the town (they later repeated these tactics). The hopes for an ethnic state or annexation into Germany collapsed on 7th December 1918 when the Czech army took control of the town. Czechs were co-opted into the municipal board but, of course, it was controlled by Germans based on elections, and Dr. Walther remained mayor. At the first joint meeting, Walther made it resolutely clear that German would remain the official language in the town hall.

The municipal theatre burnt down less than one year afterwards. Walther designated the construction of a new one as a priority despite the fact that the town had no money for the construction work. Neither finances nor the actual need to build a grandiose eight-storey edifice with 185 rooms were the point; the point was to demonstrate great German culture and cultural character; sumptuous proof of which nation Teplice belongs to. The artistic programme, which featured no Czech works, corresponded to this as well. The selection of a repertoire focusing entirely on German pieces was even backed by Goebbels’s Ministry of Propaganda in the 1933 season.

In the end, the theatre cost mayor Walther his position in 1925, one year after its opening. The project cost twice the amount of money planned; specifically, instead of 14 million it came to 28 million Crowns (which is equivalent to approximately half a billion Crowns today) and Walther was removed by his own German National Party. The imposing theatre building is not only a reminder of ethnic fighting in the late 19th and early 20th centuries, but also of one obstinate mayor.